The most competitive and highest-paying late model touring series for Late Model racers, the World of Outlaws, made two stops near the Ohio Valley this weekend. The weekend was supposed to be a three-night event ending at Tyler County Speedway on Sunday, but Mother Nature decided that didn’t need to happen.

The World of Outlaws Late Model series started in 1988 and continues to be one of the most popular tours in the nation. With most one-night shows paying $10,000 to win, you bet the drivers of these 800+ horsepower machines leave it all on the track every night.

The weekend’s events left a couple Mid-Ohio Valley ties on the podium both nights.

Friday night was night one of the Outlaw invasion and took us to Atomic Speedway in Chillicothe, Ohio. Atomic, formerly known as KC Raceway, was just voted one of the top 10 tracks in the country for the second straight season. Thirty-three Late Models poured through the pit gates at the speedway in search of the $10,000 purse.

After setting fast time in qualifying and winning his heat race, 22 year old Devin Moran started the race on the outside pole next to Frank Heckenast Jr., but quickly  took the lead on the first lap and never looked back. From just up the road in Dresden, Ohio, Moran is racing his first full season with the World of Outlaws and is chasing the Rookie of the Year title. 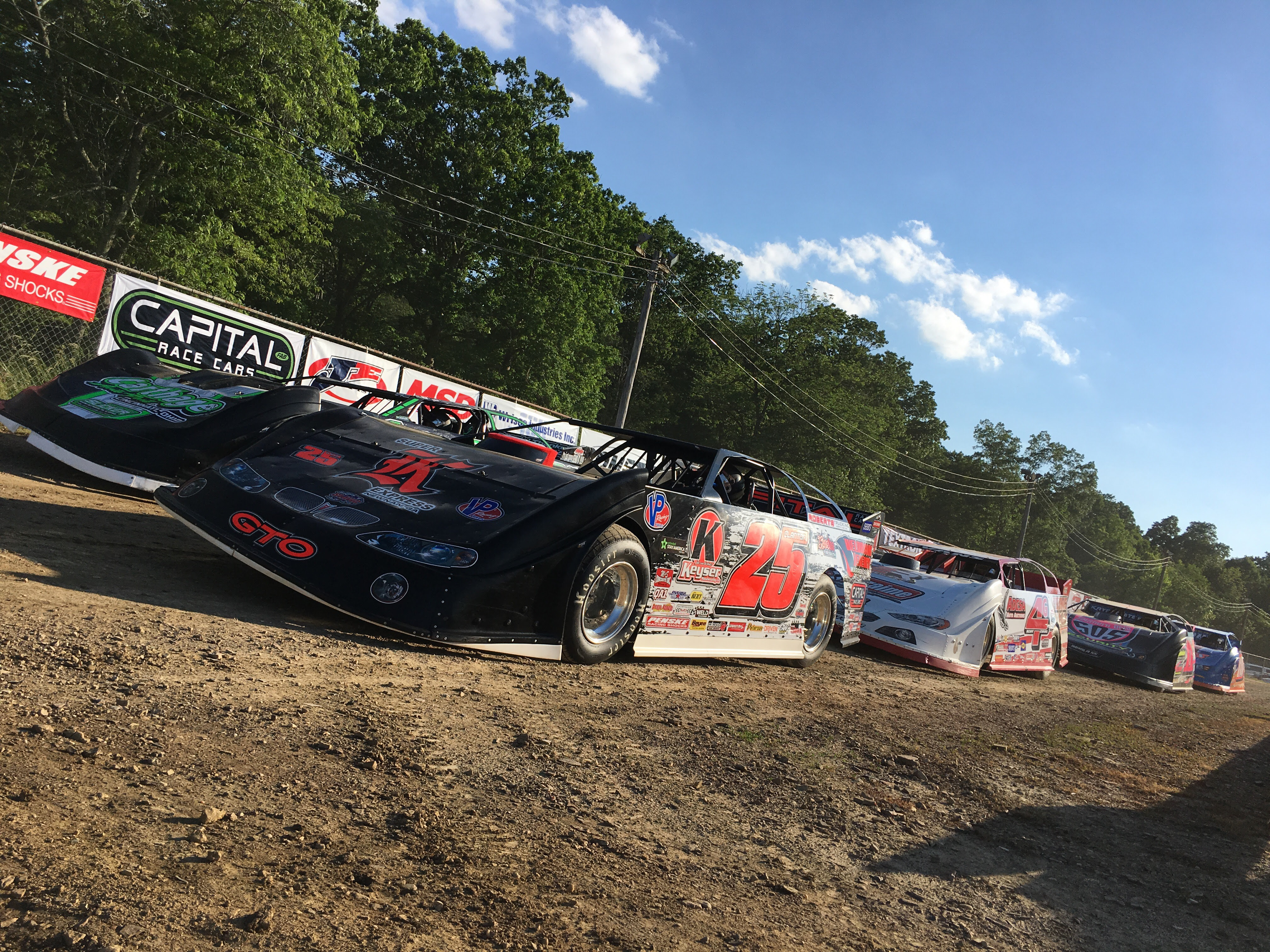 The hard charger of the night was Steve Casebolt, who was contacted the Tuesday leading up to the race learning he had landed a new partnership with Jim Beeman Motorsports. It’s safe to say the the combination started off on the right foot because Casebolt took the c9 car from 13th starting position up to 2nd and a had shot at the lead with a handful of laps to go.

But it was Moran who took the checkers first! “Once I crossed the finish line, I know it sounds stupid, but I yelled in my helmet. Most of my emotions happen right when I cross the finish line. It’s so cool and surreal because I’m by myself in the car. That’s when i give my biggest yell, under my helmet, when I’m in the car, when no one can see me.” 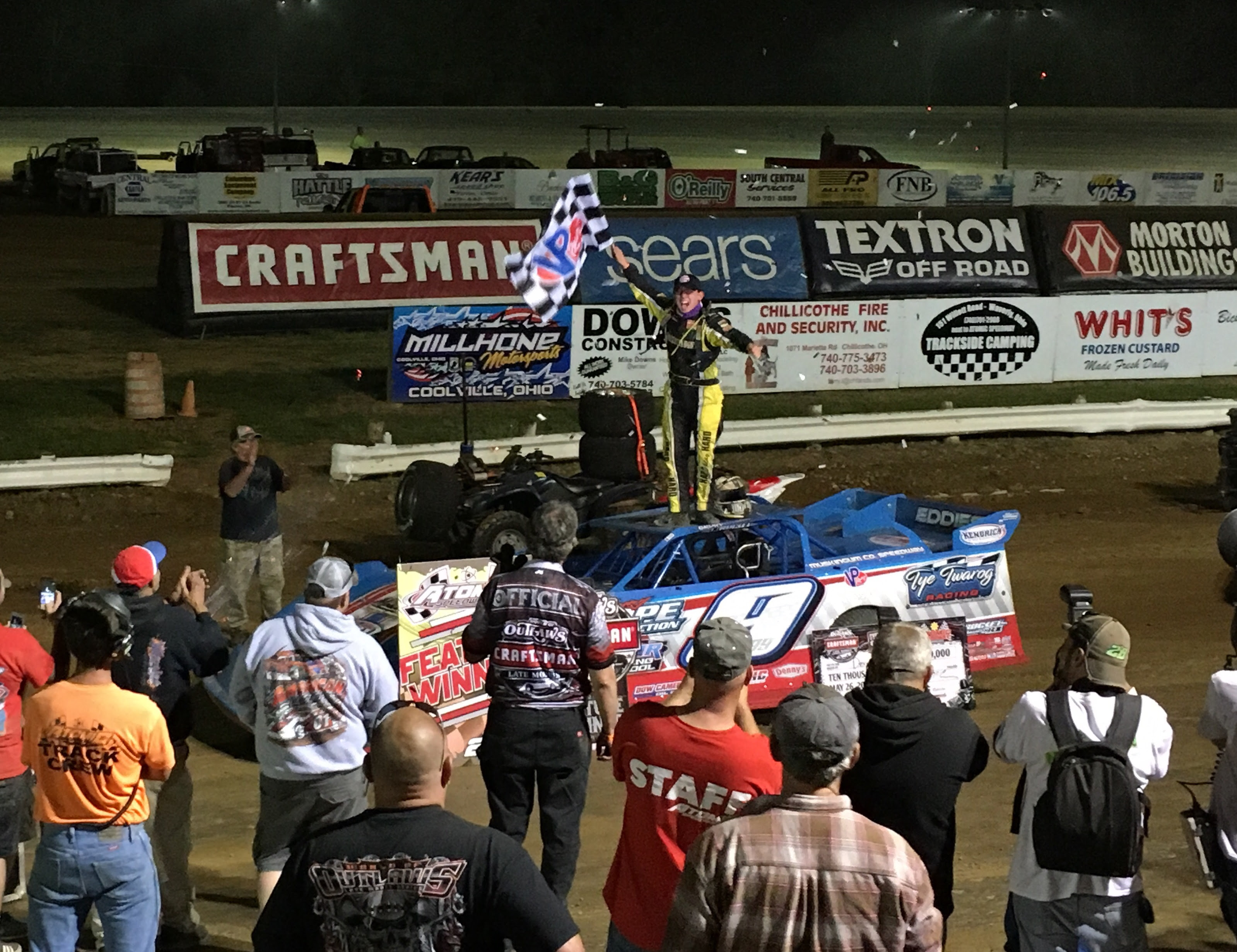 Reflecting back on the final few laps of the 50 lap feature, Devin had a few late contenders who tried to take his first win away from him. Brandon Sheppard and Steve Casebolt both made a couple attempts to steal his thunder, but Moran kept his calm and gave himself a little pep talk when the white flag dropped, “When I got the white flag I was like ‘don’t mess up, you’ve got one!’ I didn’t wanna mess up or hit the wall and lose the race for myself.”

2,380 fans were in attendance at Atomic Speedway for Friday Night’s event. Track owner and promoter, Brad Mckown, puts a lot of effort into bringing big events to the area. “Bringing in big sanctions is great recognition for a track. We prepare just like a regular night but for bigger crowds. It’s so much more risk on bigger paying shows, but I’m a gambler so it’s just another day at the office for me.” 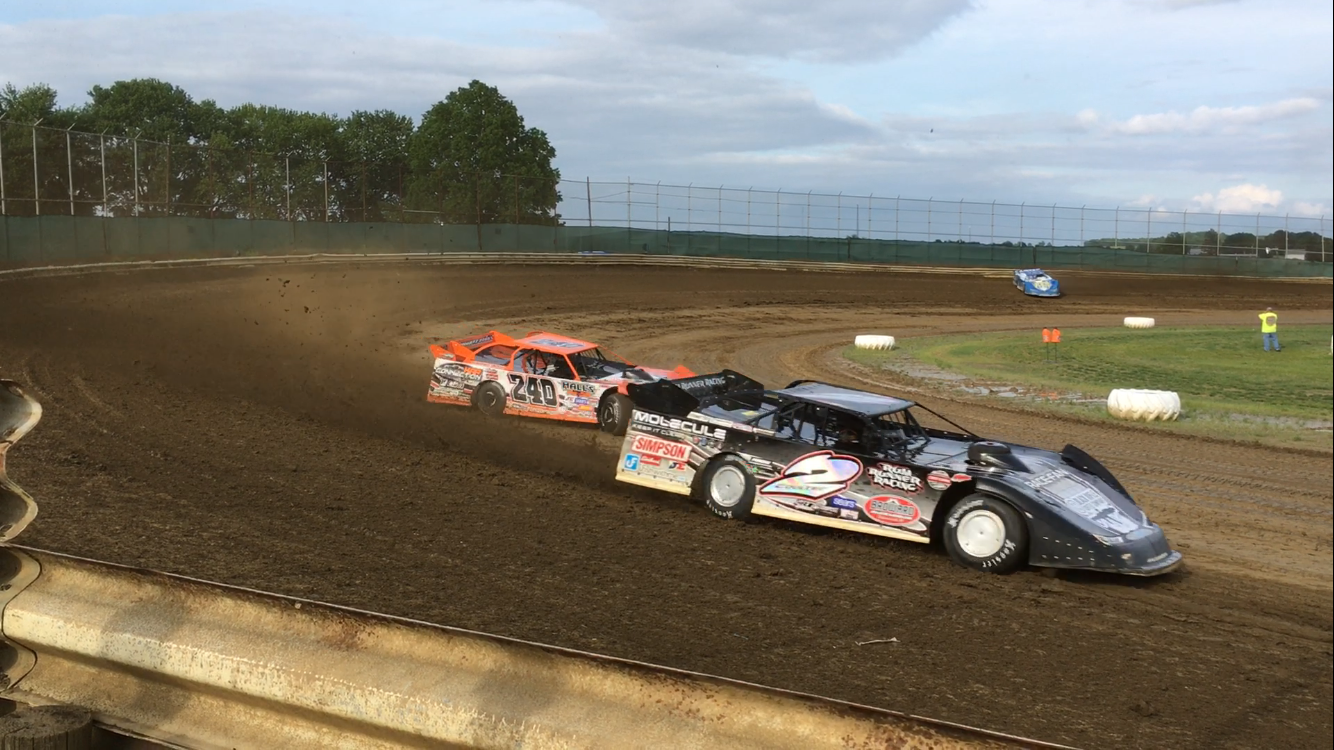 Saturday, the Outlaws made the short trek from Chillicothe over to Orville, Ohio to spend the night #2 at Wayne County Speedway. 31 Late Models checked in for the night’s festivities and things got interesting in a hurry!

In the first qualifying group, the “Rocket Shepp”, Brandon Sheppard set a new track record. Sheppard drives the #1 Rocket Chassis house car. Rocket Chassis is one of the most popular Chassis in dirt racing and they’re manufactured in Shinnston, WV! But Sheppard’s excitement was short-lived because in the very next group, Chris “Smokey” Madden’s lap time was even faster and became your current track record holder at Wayne County Speedway. 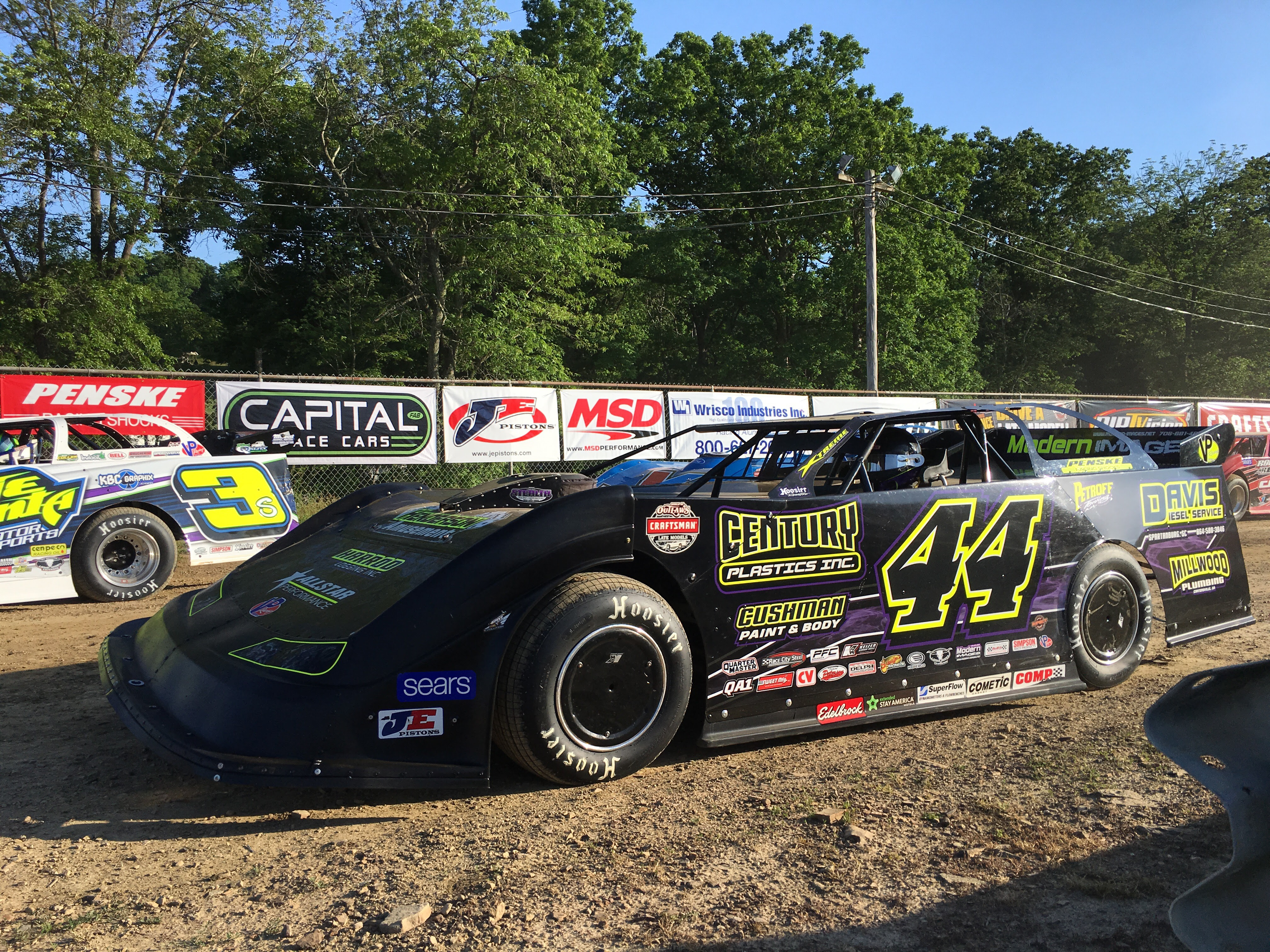 It doesn’t matter where you start the race, it’s where you finish it – Sheppard and Devin Moran showed proof of that in the feature. Brandon Sheppard drew the 6th starting spot in the redraw, but fought his way up to the lead on lap 21. Meanwhile, Devin Moran, who had some car trouble in his heat race, had to make the Feature by winning the last-chance qualifier. He started 16th, but before too long found himself in the 2nd position. A couple of caution flags gave Devin the chance he needed at giving Sheppard a run for his money, but there was no touching the Rocket Shepp, as he came to the checkered flag first. 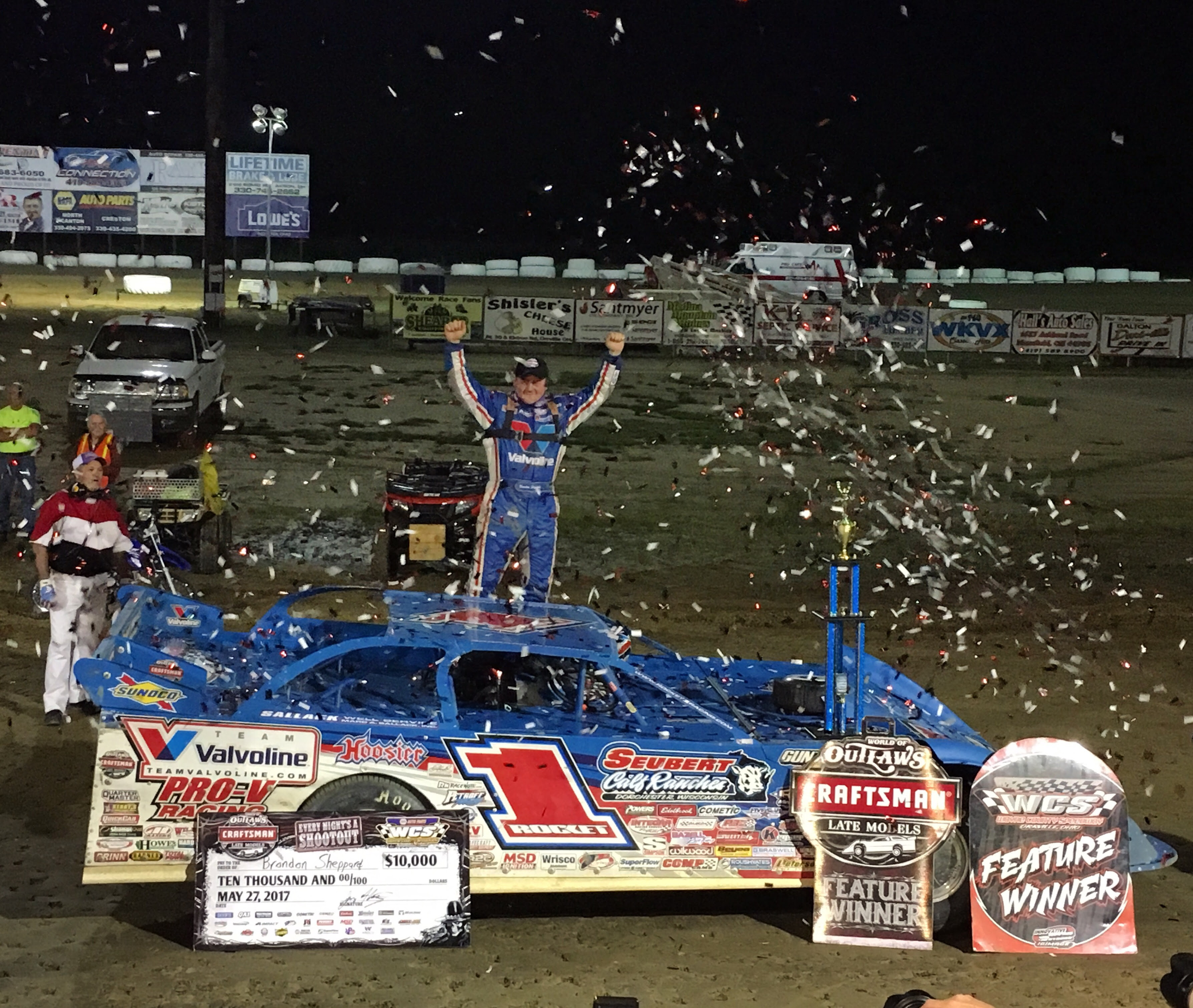 Wayne County Speedway plays host to Tony Stewart’s All Star Circuit of Champions Sprint Cars multiple times a year, but the area doesn’t get to see the either World of Outlaw series very often.  “We always enjoy bringing in the World of Outlaw Late Models. They bring a great field of the nation’s best late model drivers plus a great crew of employees who make the show go without a hitch.”, said Track General Manager, Ryan Pearson. “The racing last night was tremendous! THAT is why we bring them in. To offer a great show to our fan base. Those guys last night (Saturday) earned it & that’s exactly why we do it!”

Dirt track racing is quickly growing in popularity, especially from NASCAR fans who are tired of all the rule changes and restrictions that have made the racing less exciting. Another reason is it’s a fairly inexpensive means for an evening of fun and entertainment. Most local tracks charge between $10-$20 for adult general admission and give price cuts or free admission for kids. (Special events may mean a higher admission cost.)

I’m not afraid to travel a few hours to go see bigger races like the World of Outlaws, Lucas Oil Late Models, World of Outlaw Sprints, and the All Star Circuit of Champions Sprints, but on a normal weekend, you’ll find me at the local tracks surrporting local drivers, series’, and racing. Sometimes you get lucky and see a bigger name or two show up at a local track, which is always exciting.

Cars in the pits at Wayne County Speedway 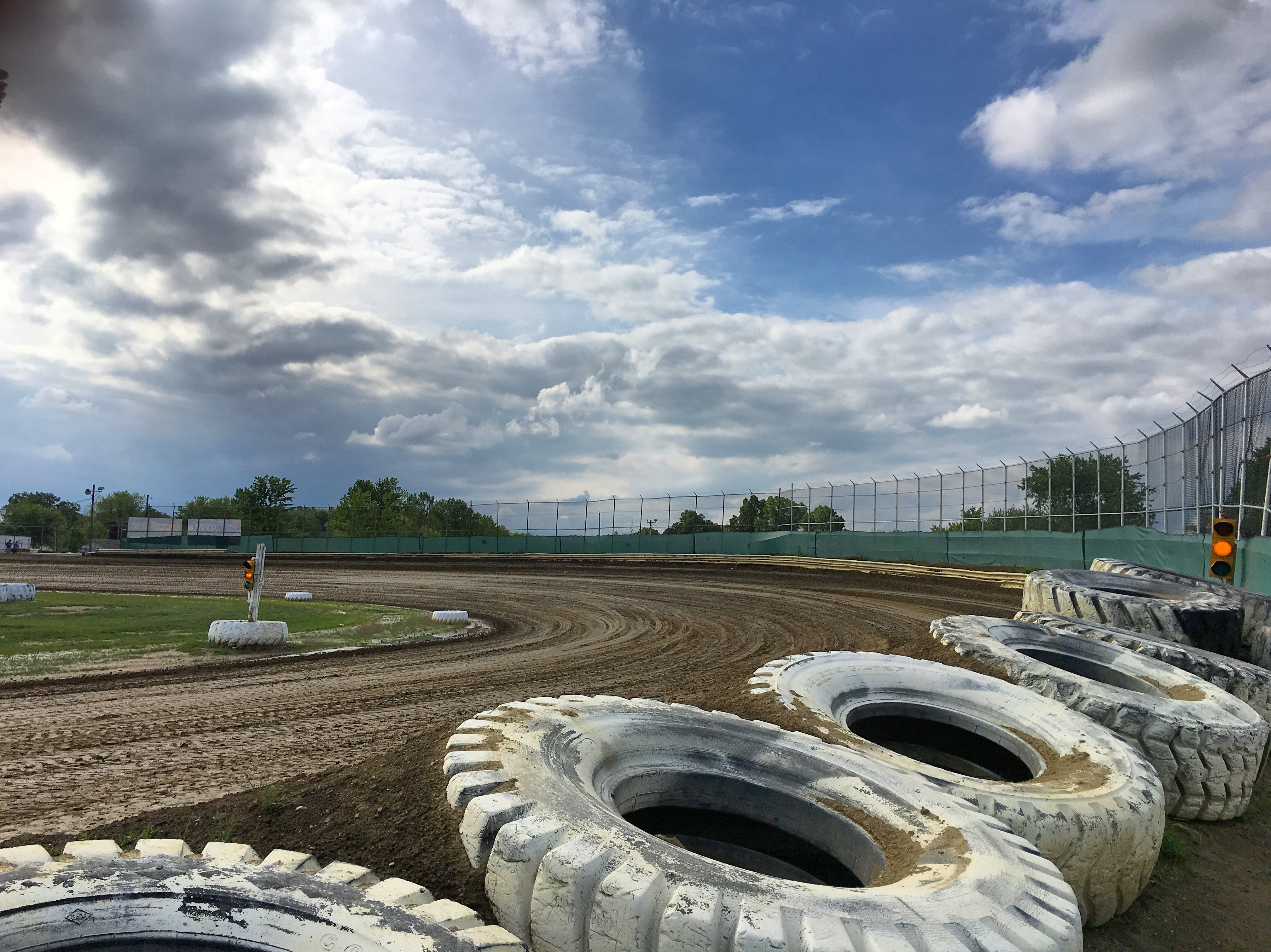 View of turns 3 and 4 at Wayne County Speedway