As I was sitting on the couch watching Shawshank Redemption with my husband for the umteenth time, I happened to recall someone mentioning that the prison they used to film the movie was located somewhere in Ohio. I grabbed my phone and quickly googled “Shawshank Prison.” In the results I found, “Ohio State Reformatory.” I immediately decided I would surprise my husband with a daytrip to the prison in the near future.

A few weeks later, we hopped in the car and headed to Mansfield. After two and a half hours of driving, we rounded our last turn and there it was. It was massive, beautiful and haunting. We turned onto the tree-lined driveway and it was as if the trees dramatically unveiled the structure one by one.

In complete awe, we parked the car and found our way to the entrance which led us into the gift shop where we paid the lady to start our tour. The prison is open from 11 a.m. -4 p.m. daily. Tours are $12 a person, $10 for military/veterans. We were able to choose between a self-guided or guided tour. We chose the self-guided option for photography purposes, plus, there’s something eerie and fun about walking through and exploring an old prison alone. 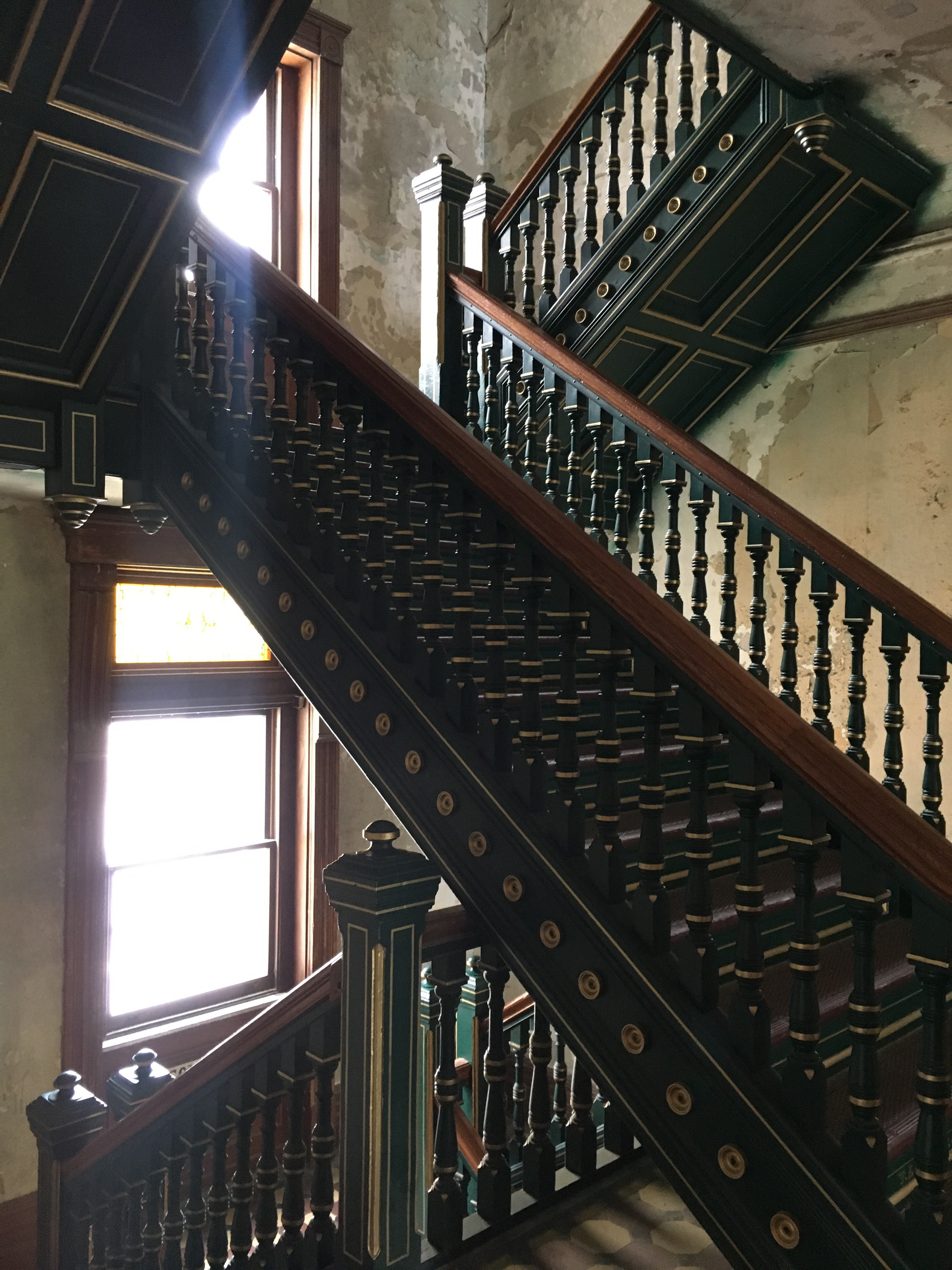 The details inside the office and housing portion of the prison were astonishing! The staircases and windows in particular caught my attention. The fact the wallpaper and paint had been left alone to peel and deteriorate continued to give the tour a haunting feeling. 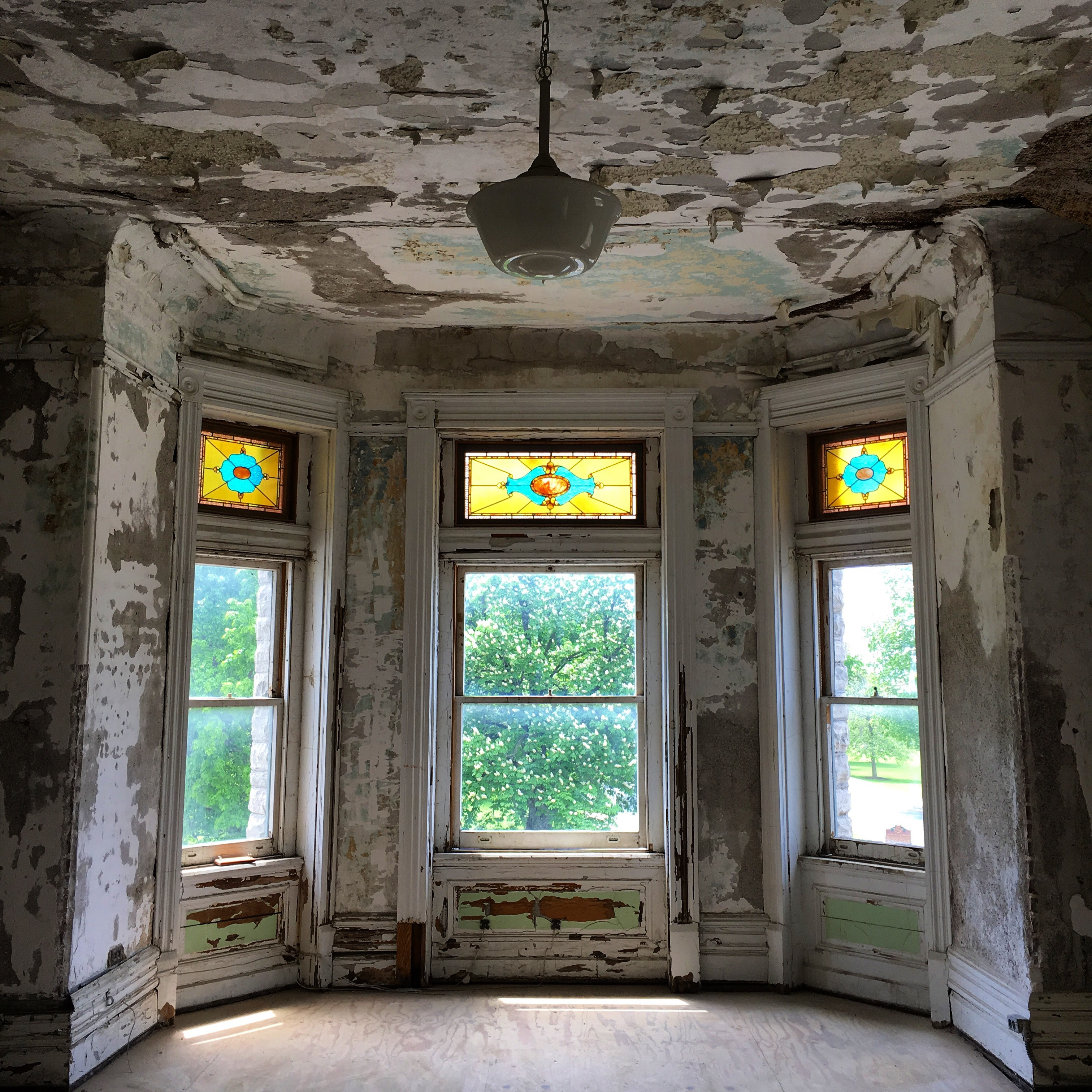 As we made our way through the first section of the tour, we found ourselves in the warden’s quarters, the parole board room, and the warden’s office (where you might recall a lot of the scenes from Shawshank Redemption were filmed between the warden and Andy Dufresne.) Certain rooms along the tour where iconic scenes from the movie were filmed were staged to reflect it and also provide tour-goers photo opportunities to sit at the warden’s desk and go through the infamous safe where the warden locked up his record books every night. 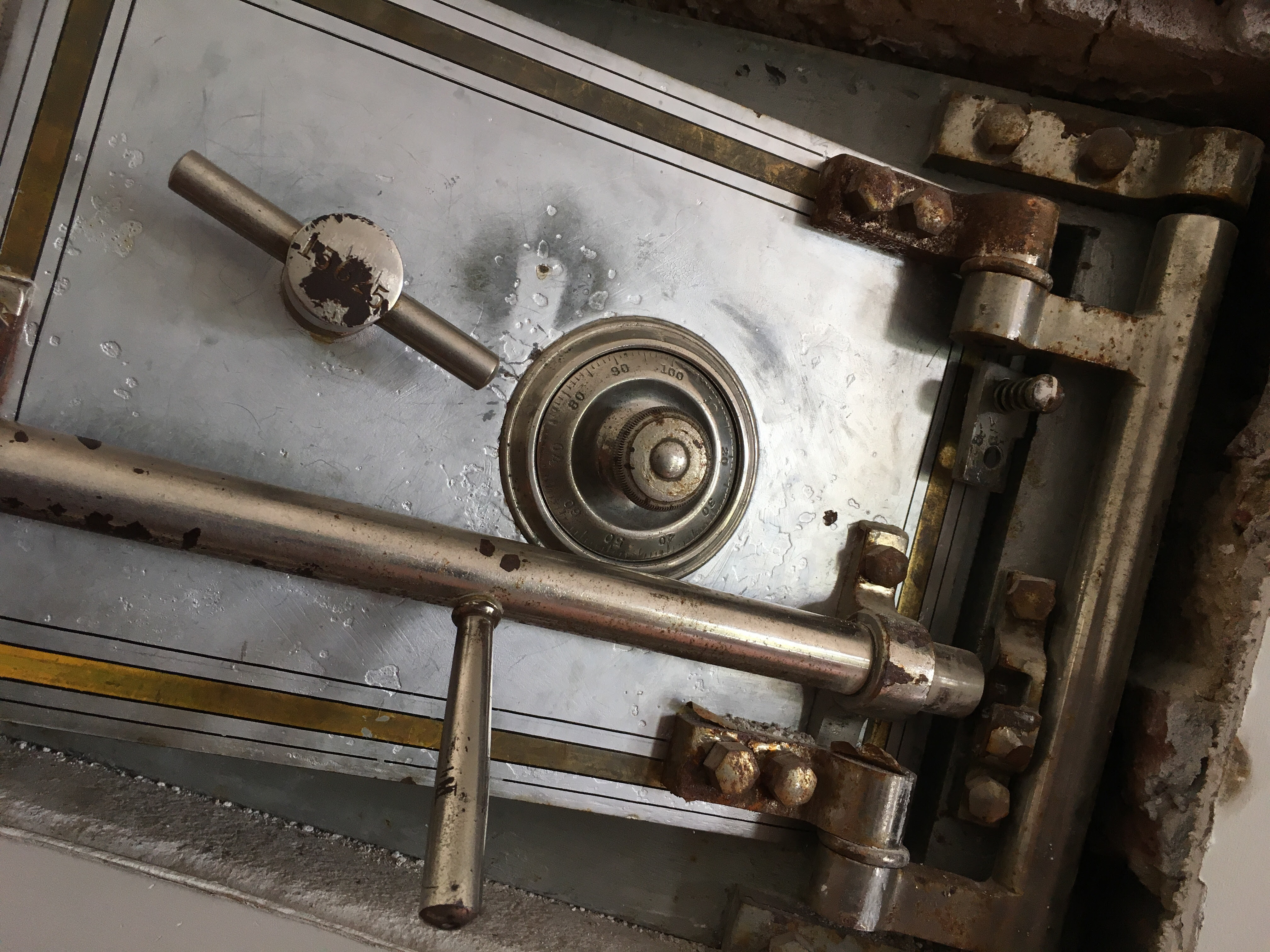 After going through all of the wardens’ things, we made our way into a replica of Brooks’ room from the halfway house where he and Red stayed to get back on their feet after they were released from Shawshank Prison. Then, we climbed a spookily lit staircase into the open chapel. 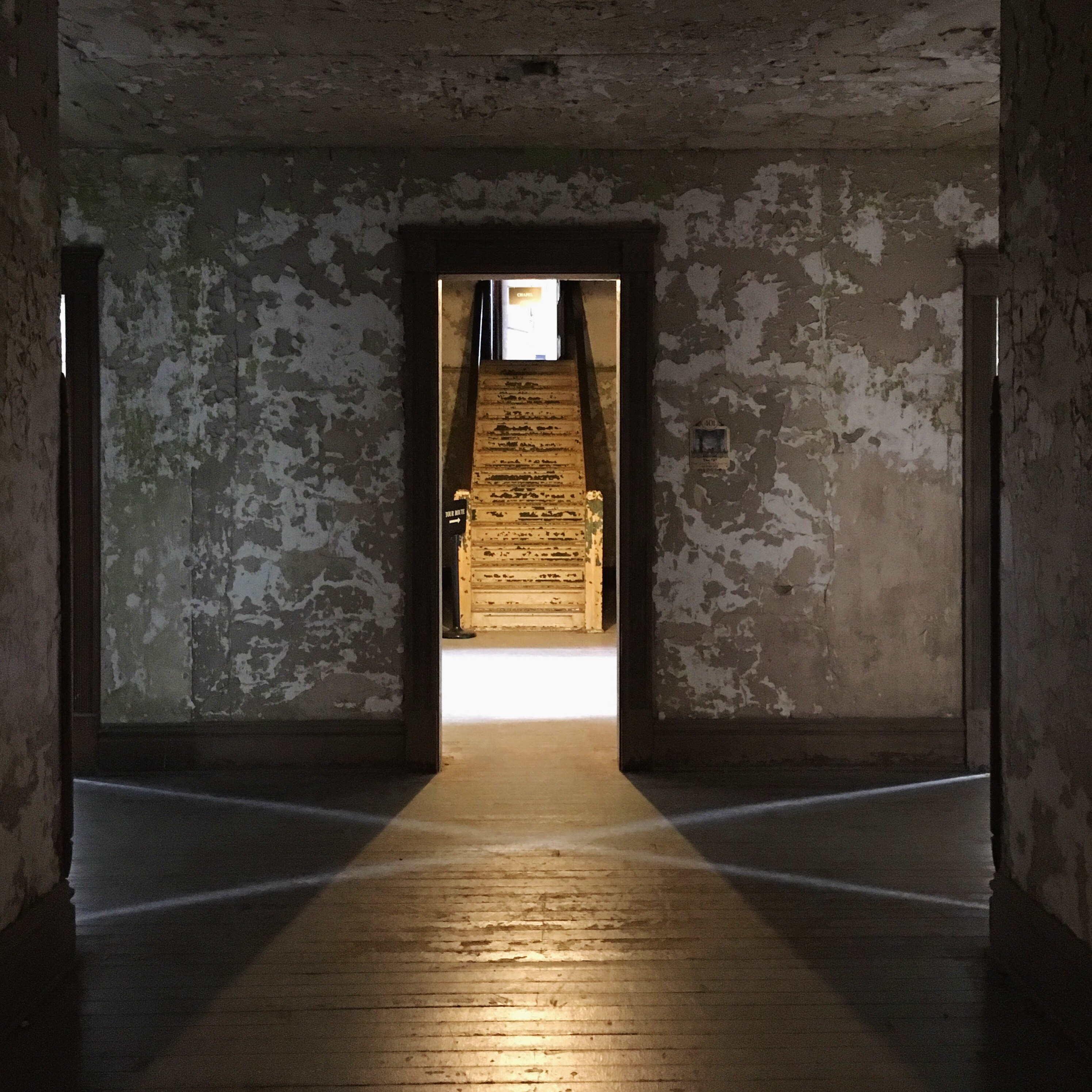 Along the tour route, there were photos of inmates and prison personnel from when the building was a functional correctional facility. We also found some original artwork from the chapel kept in cases to help preserve the pieces.

Directly off of the chapel was the East Cell Block. We tip-toed over the steel grate walkway onto the sixth and top level of the cell block. The view through the caged-in walkway looking down at massive windows was a jaw-dropping sight. 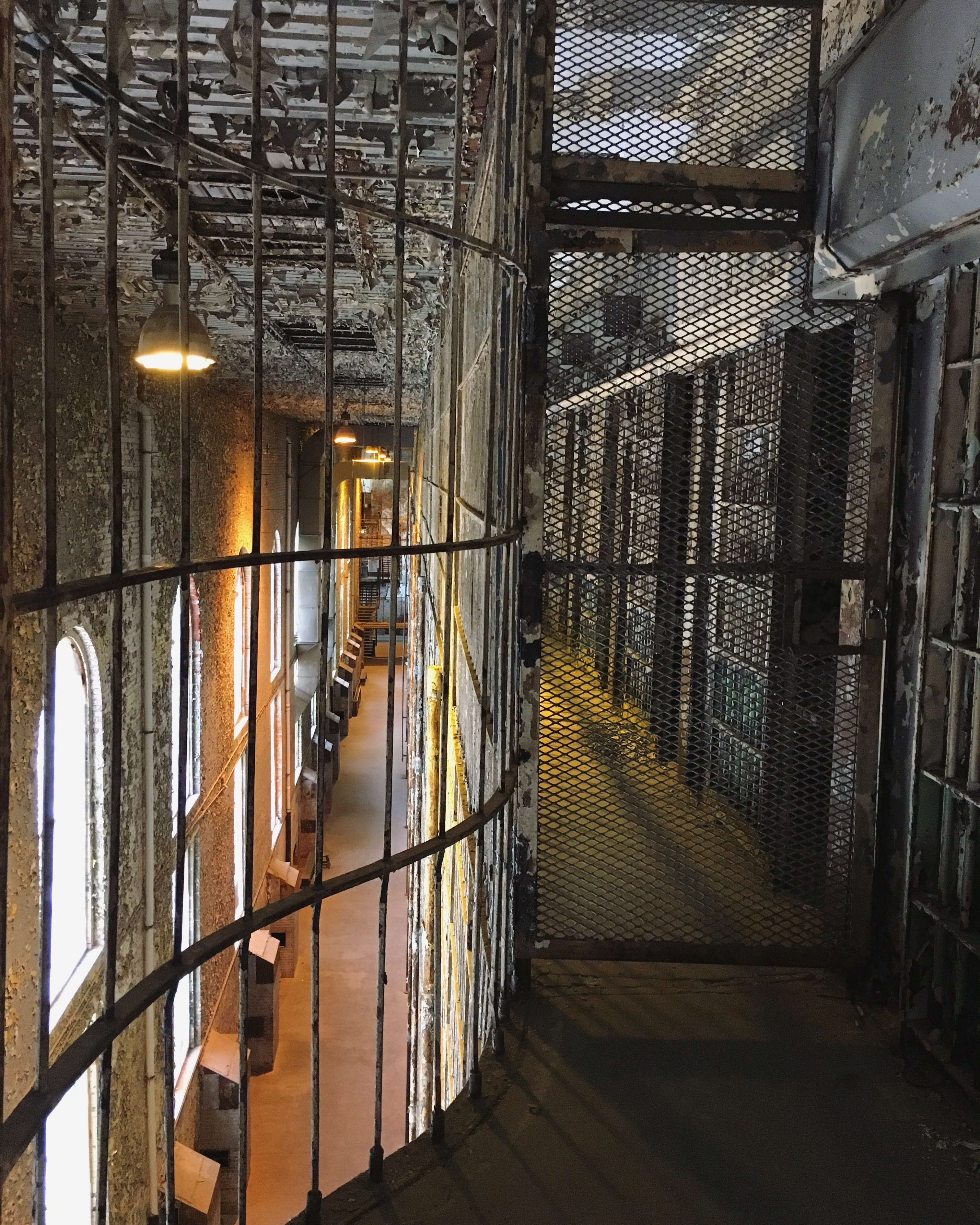 As we snaked our way through the levels upon levels of cells, the thought of having to live in such tight quarters made me a little claustrophobic. Barely having enough room to stand between the wall and bunks, with just enough room to fit a toilet in between the two. There’s no way I could ever live like that by myself, let alone having to live in that cramped cell with another inmate.

We finally found ourselves on the ground level and when we did, we were able to see just how massive the world’s largest free-standing cell block actually is! 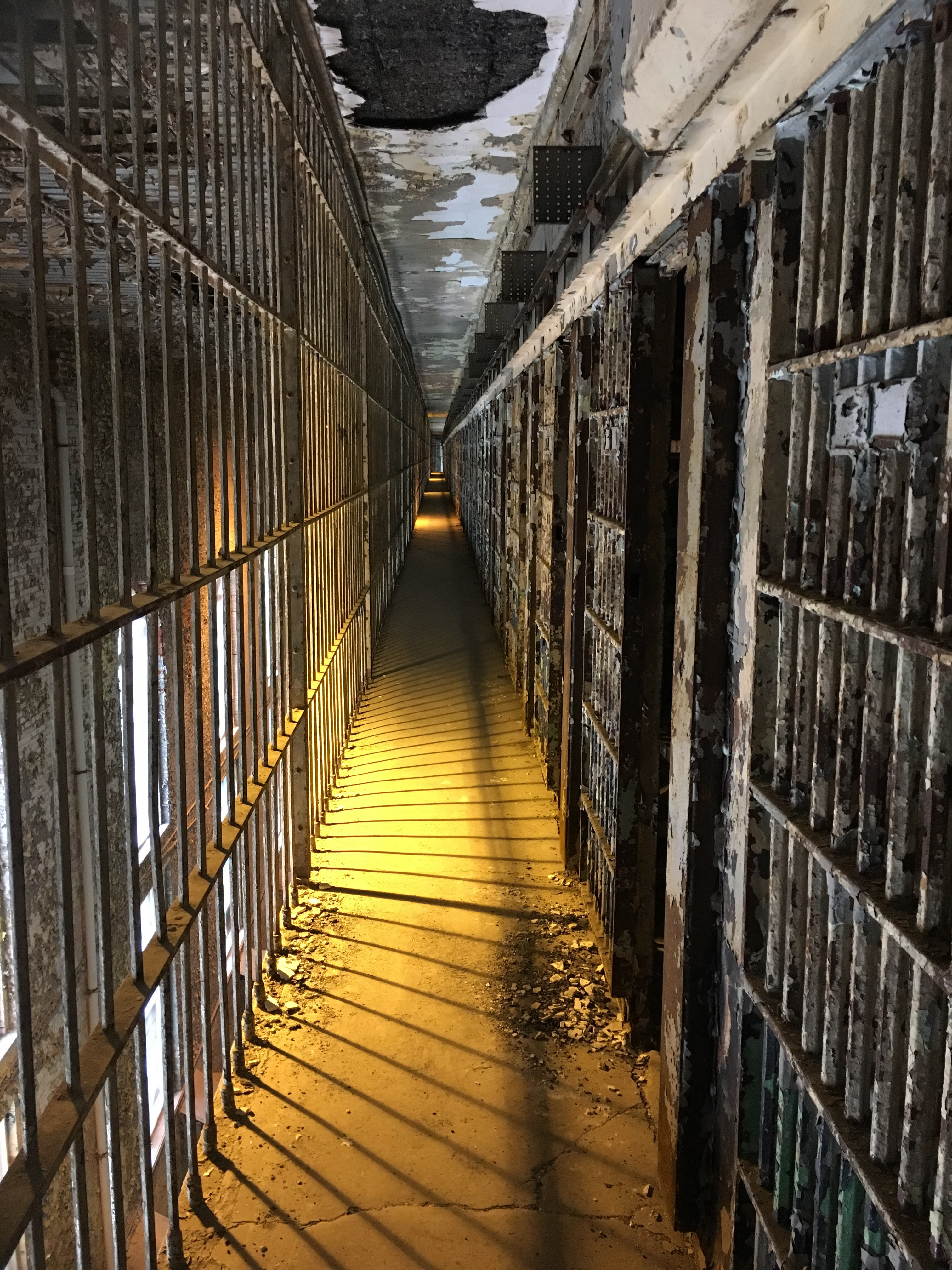 Between the East and West cell blocks was the library, break room area, and the guard/ball room. You may recognize this area from the movie “Air Force One” where filmmakers used the reformatory to depict a Russian Prison. I was so overtaken at the beauty of this space that it took me a good five minutes to realize I could see the cell blocks beyond the floor to ceiling windows. 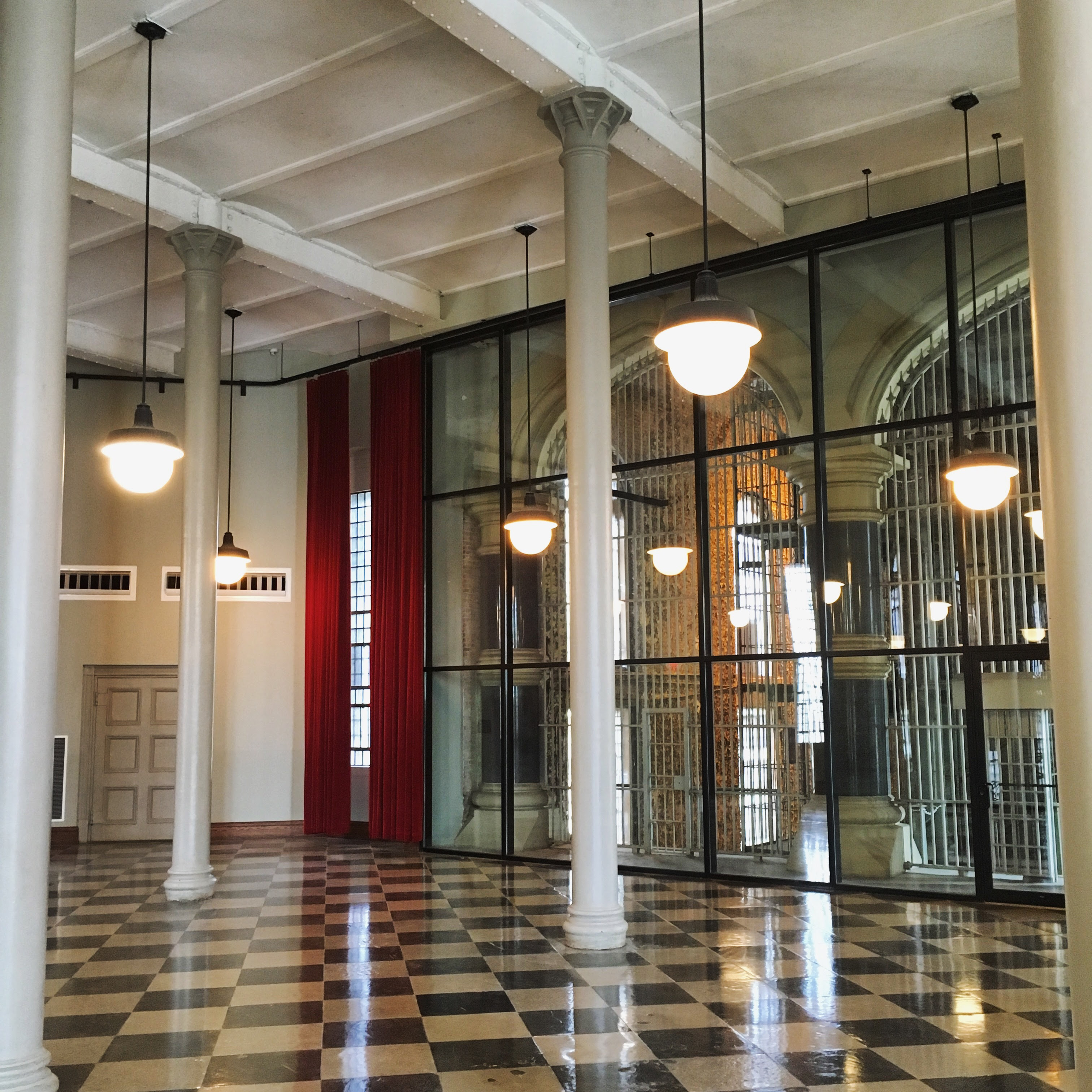 After taking the elevator back downstairs, we saw the sign for solitary confinement. AKA: The Hole. The loop of solitary cells was cold, dark, and damp. The lights that lined the hall were so dim, they gave you just enough light to see where you were walking and nothing more. It gave me the creeps just looking into the pitch-black cells.

Some of the cells throughout the prison looked like they had been left just as they were when the reformatory closed its doors in 1990. Mattresses, sheets, clothing, books – it made you feel like part of the inmates still existed inside of the prison walls. 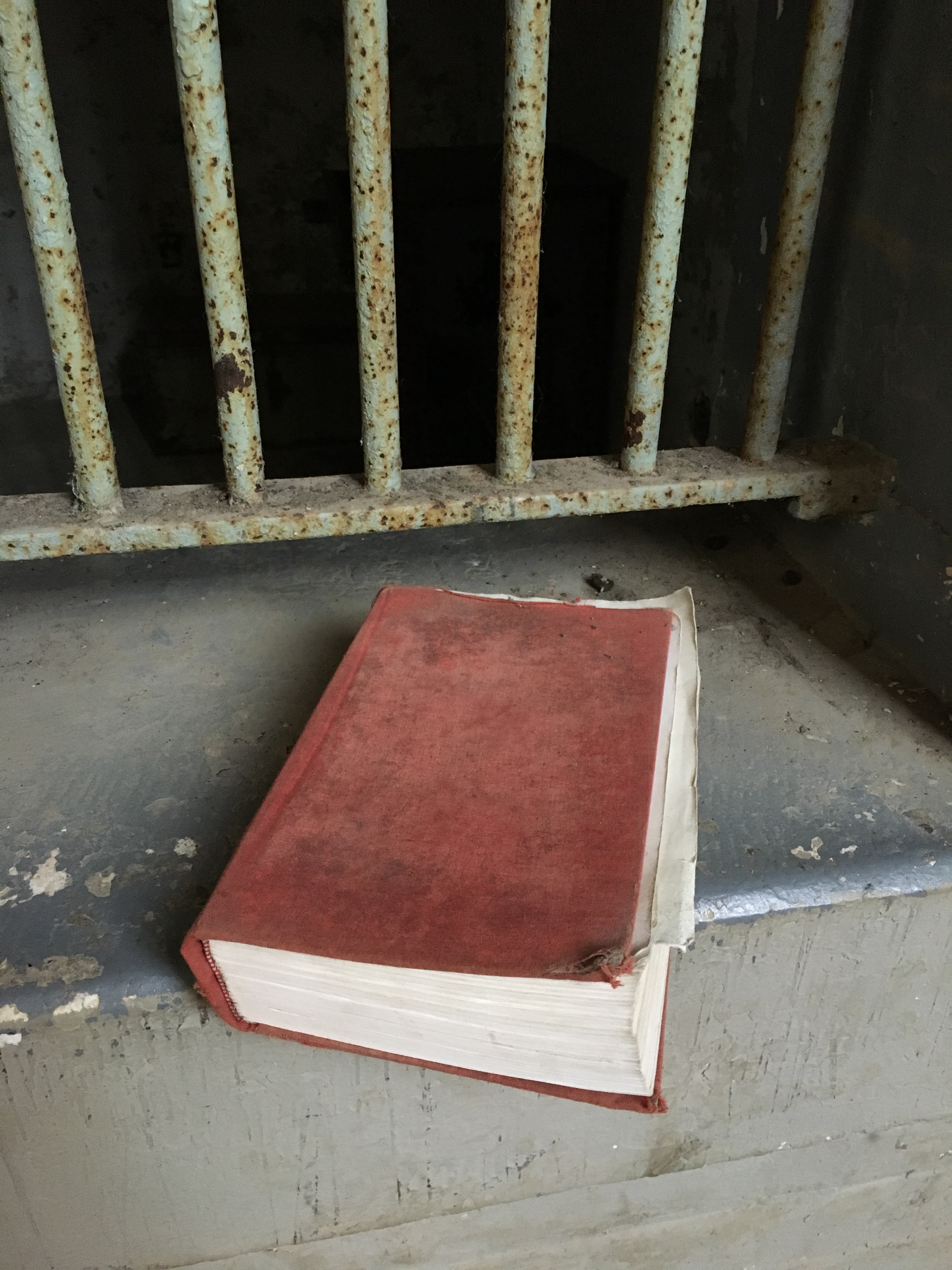 Finally, we found ourselves in the West Cell Block. Not nearly as large as the East Cell Block. The West Cell Block can also be found in the movie “Air Force One.” My husband and I made our way around the free-standing Block and stumbled upon a gold and red cell. I stopped him and wondered why the cell was so different from all the others. Upon closer inspection, we found a paper inside that explained to us a Lil Wayne music video had been shot in this cell and on the premises of the prison. 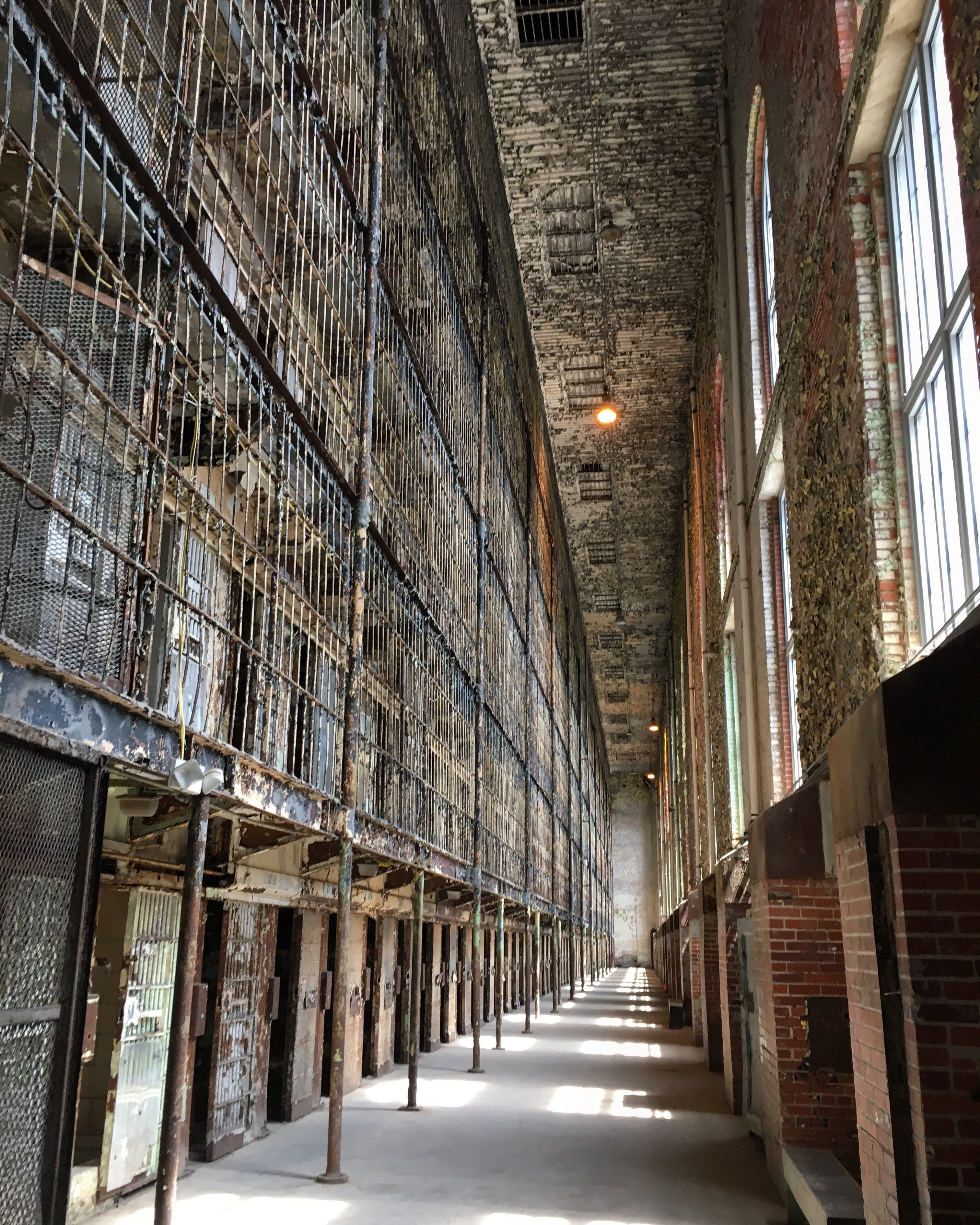 When we were finished with the West Cell Block, we climbed a few stairs, walked down a short hallway, and found ourselves back at the gift shop. Still in awe, we walked out the front doors and examined the outside of the building. We walked to the pond near the entrance where we found the “Shawshank Tree” where Andy left a letter and money for Red to find when he got out so that him and Andy could live happily ever after as best friends. The tree recently got struck by lightening, so they moved it onto the prison grounds for tourists to see. You can also drive around the town of Mansfield and find a few of the other movie sites along the “Shawshank Trail” (like the grocery store and the pawn shop.)

My husband and I talked about our trip for days and I couldn’t wait to show and tell everyone about our trip to “Shawshank Prison.” I took so many pictures. I struggled to pick only a handful to accompany this article, because if I included every little detail, I wouldn’t leave you much to go and explore for yourself now would I? 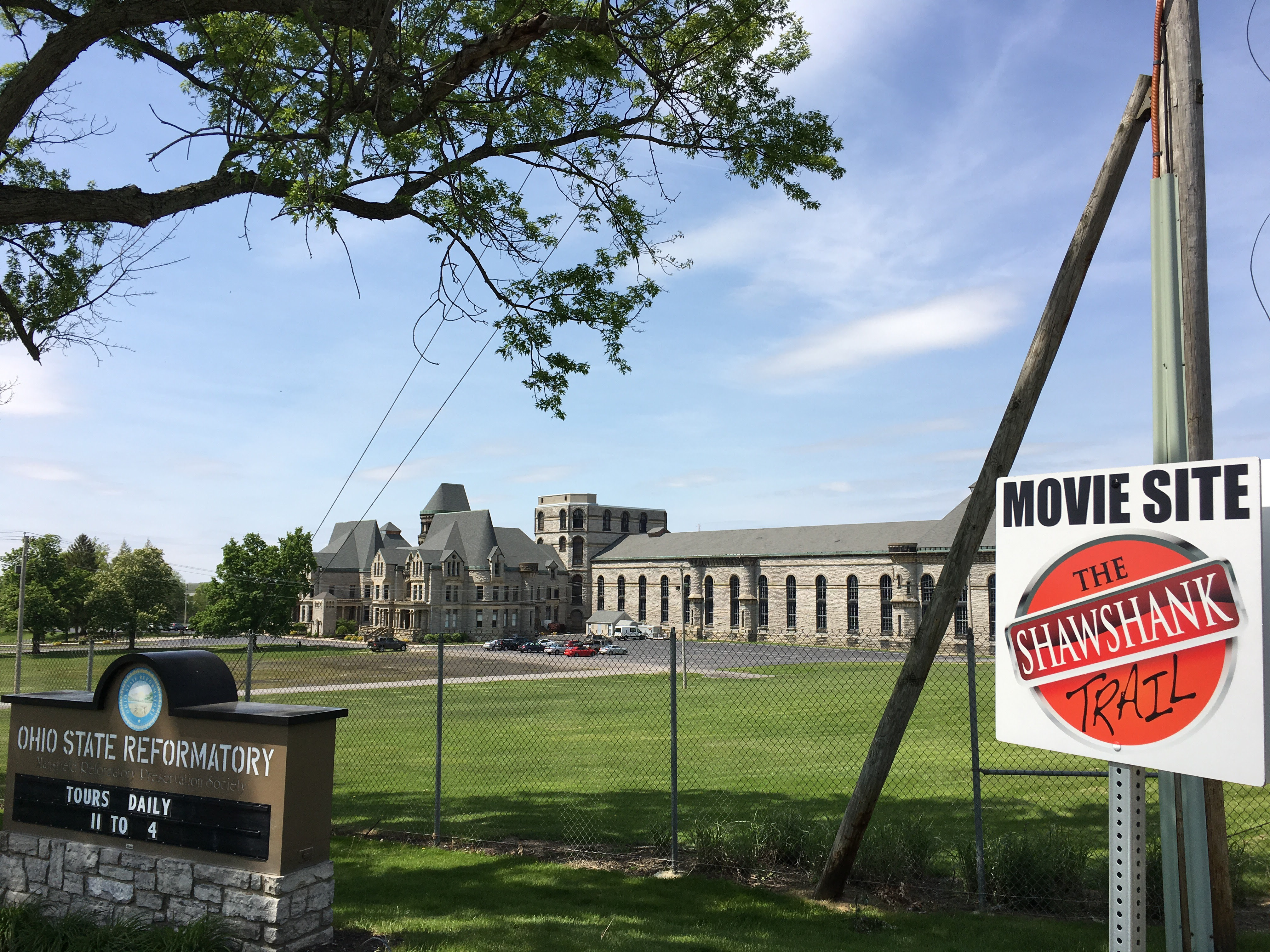 The Ohio State Reformatory is ran and preserved by volunteers. The prison was feared to be demolished until Hollywood filmmakers came forward in 1994 and wanted to film a movie there. Since then, tourism, ghost hunting, and the hard work of these volunteers have kept the prison afloat.